Victorious! Sew for Victory Sew Along

I decided a few weeks ago that I would join the Sew for Victory Sew Along hosted by Rochelle at Lucky Lucille (check out the button on the right). It's a 1940's themed sew along and I just love that era. I used a 1948 Simplicity pattern to make my dress. Here it is all finished! 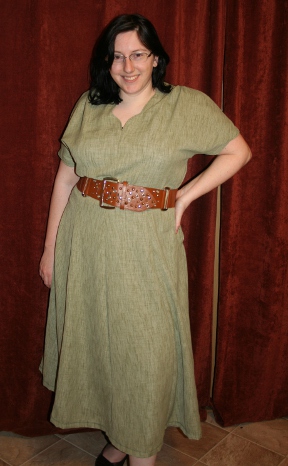 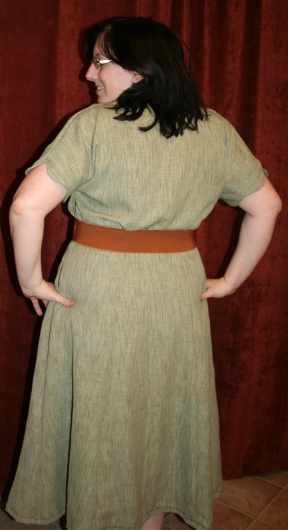 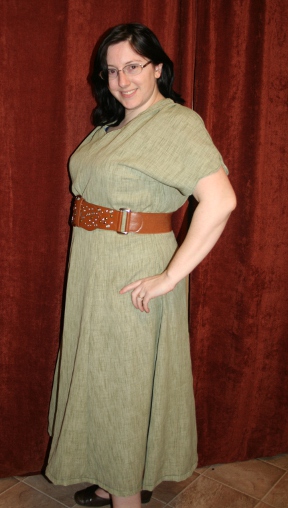 I also needed a slip under the dress because the fabric was semi-sheer. My only (modern) full slip was way too short so I ended up making one from a 1940's Advance pattern. Here it is: 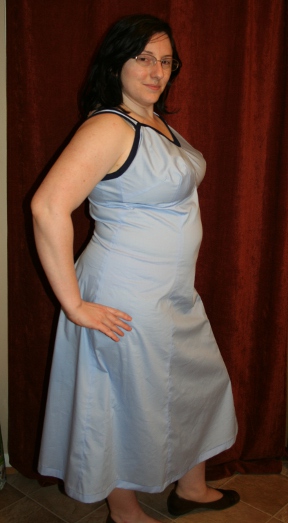 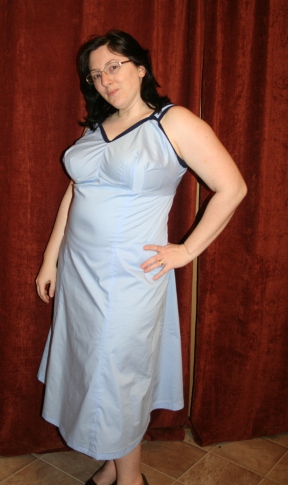 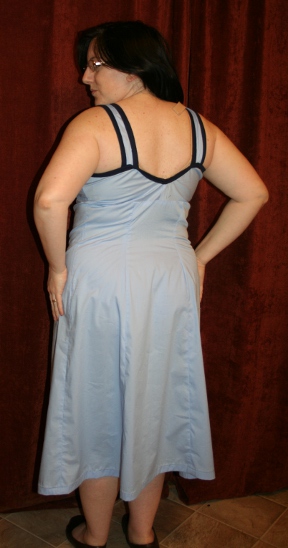 My inspiration:
My paternal grandmother, a woman who I often considered to be a mother more than a grandmother, was one that would never waste anything. She was born in 1920 and remembered the Great Depression. She spent her days in the 1940s keeping up a farmhouse and raising 4 of her 5 kids (the 5th came in the next decade). One of those 4 children was my father, who was born in 1946, so he was one of the first of the Baby Boom generation. I can imagine her wearing comfortable, simple, but kind of pretty house dresses. She'd have her wedding ring on and pretty much no other jewelry. Baubles were reserved for when she left the house. She'd have on her perfume but not have makeup on in the house. If she was going shopping she would never leave without her lipstick on. That's pretty much all she ever wore. She never fussed with all that other stuff. She'd use her Oil of Olay moisturizer and maybe a little blush, but she'd wear vibrant lip color. Usually some sort of coral or red. She was a natural beauty and really didn't need a lot of makeup to look stunning. During that time she had very dark hair, nearly black, and crystal blue eyes.

A little tidbit: Grandma's baby brother died in WWII. He was an Army Private that was in the group who stormed Normandy Beach. He barely made it to land before he was hit and killed by the Germans. Grandma had his Army picture hanging in her living room and when I was a little girl I asked her when Daddy had been in the Army. My dad looked a lot like her baby brother. She told me who it was in the picture and his story. I hope I never forget that memory.

Pattern: Simplicity 2486 (1948)
Size: 40 (40 Bust/43 Hip) with alterations
Fabric: I can't remember the fabric content of this, but I think it's a poly/rayon blend. Lightweight but slightly stiff drape. Almost sheer.
Does it look like the picture: Yes! Identical with the exception of the change I made to the hem and the bodice.
Were the instructions easy to follow: Yes! This pattern was awesome! It was a printed pattern that was marked clearly and the instructions were very good.
Comments:
I did a smaller than called for hem (1.5 inches instead of 3) to make the dress ballerina length. I haven't worn this length of dress in a very, very long time. I forgot how much I liked to have a dress that length. It feels so feminine to wear.

I tried the dress without shoulder pads but it really does need them to look best so I put them in.

I had to add a little to the front to accommodate my prominent upper belly. I added width to the front skirt panels (front and front side) and I didn't do the gathering on the lower part of the bodice to make sure the waist was roomy enough. I also had to do a small swayback adjustment.

The front bodice is a tiny bit long so I will adjust for that the next time I use this pattern. I would fix it on this one but a belt hides it and I don't feel like unpicking the zipper after I had such a time getting that sucker in the first time.

My lapped zipper is not the best, but it's better than others I've done so far. Practice is making me improve.

Will I use make it again: More than likely. This makes a great house dress. I could easily add scalloped patch pockets to the skirt portion. The pattern also comes with variations for a simpler, narrow V neckline and straight edged sleeves, which I would use if I were using a more prominent print.

Pattern: Advance 6333 (1953)
Size: 18 (36 Bust/39 Hip) Resized
Fabric: Cotton poplin with 2% spandex
Does it look like the picture: No. I made some design changes that changed the look a little bit.
Were the instructions easy to follow: I didn't use them.
Comments:
I resized this pattern partially. The back was perfect as sized in the original pattern. I gave a little room in the waist of the back, as it was originally designed for a girdled waist. I did a swayback adjustment and had to narrow the top of the bodice back for my narrow shoulders/back. I had to add about 3 inches to the front skirt and I completely redrafted the bodice. I made it have a similar shape, but it has a center seam instead of a surplice front, and it has darts at the bottom instead of gathers to reduce fullness. I doubled the straps instead of folding in half and stitching as I wanted them wide enough to cover my bra straps. I bound the bodice and straps in contrasting bias binding that I made from scrap crepe fabric. I had to shorten the straps considerably, and I gave it a 1.5 inch hem so it would be just shorter than my dress. I made it rather fitted but since my fabric had a little stretch I didn't need a zipper.

Will I use make it again: Maybe. This would make a great nightgown or a nice dress in the right fabric and a little more ease added.
Posted by Unknown at Sunday, March 31, 2013