Yesterday morning I wanted something easy to fix for dinner that would use whatever I had on hand. It's almost grocery day so it's getting slim around here. I looked in the freezer and saw I had a 2 pound boneless pork loin blade roast. I decided I would use that and went about finding some recipe that would let me mix it with the things in the pantry and fridge. After a Google search I came across Paleo Diet Lifestyle's Slow-Cooked Pork Roast. After a quick scan of the ingredients I knew I could make it work.

I went about thawing the roast and prepping the ingredients. I ran into some snags and had to adjust. Here's what I changed: 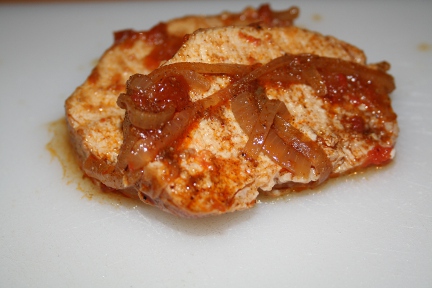 It's definitely a RAVE!

It turned out absolutely delicious! It was tender, perfectly done, juicy, and flavorful.  The entire family enjoyed it. Even my "Eww... it's meat. I don't want to eat it!" little girls ate it well and gave no complaints, which is saying a lot. This is a recipe that will stay in rotation in my menus. Next time I will try it to the letter to see if it changes much.

*Technique Tidbit - Peeling tomatoes is super simple when you do it right.

Bring a pot of water (enough to just cover the tomatoes) to a roiling boil. While the water is heating score the bottom with a knife in a X, or cross, pattern. Prepare a bowl of ice water and set aside. Put the tomatoes, one at a time, into the pot of boiling water. Leave in pot for 20 seconds. DO NOT LET THEM BOIL LONGER THAN THIS! Remove the tomatoes and immediately place in the bowl of ice water. Let them rest, covered in ice water, until they cool. Score the skin with your knife around the equator of each tomato. Peel. The top and bottom half ends will peel in one piece!

I hope you enjoyed this review and technique information. I will be back on Sunday with a craft post. See you then!
Posted by Unknown at Wednesday, February 27, 2013